The colors of the daybed duvet and pillow cases were suggested by the two square patchwork pillows I made for the futon couch I had in Otis and the living room walls, which were kind of a cerulean blue. When I came to Chicago, I left the couch in a storage unit and decided to bring the daybed instead, which meant it needed a totally different treatment than the one I'd had in Otis, when it had been the spare bed for guests in the small second bedroom. There it was violet to a redish violet lavender.

I had never made patchwork anything before, but I figured, How hard could it be? It involved graph paper, measurements, and careful stitching. I used a lot of my graphic design tools to make the shapes. I like the Bristol board that's marked in a nonrepro blue, but it's not always so easy to find, so I've used a more flexible graph paper on occasion as well.

I had bought much more fabric than I needed (a sewer's trait, I recognize), so I used the leftover excess fabrics along with sheets I bought from The Company Store to make the major coverings, like the standard-sized pillow covers, the duvet, and the four-sided dust ruffle.

I decided to make the dust ruffle four-sided so it would stay in place. Dust ruffles move around, which I find really obnoxious. I even made an inch-deep depression so it would fit neatly into the bed's frame, which it does. My hope is that over time and with many washings, it'll fade somewhat and not be quite so garishly bright.

The entire set took me roughly three months to design and make. I used graph paper for the design.

(Note that Gomez, one of my cats, always liked having his picture taken. At present, he's gone to the land where good kitties go after they pass from this life, where I hope he is as happy as he was when the photo was taken.) 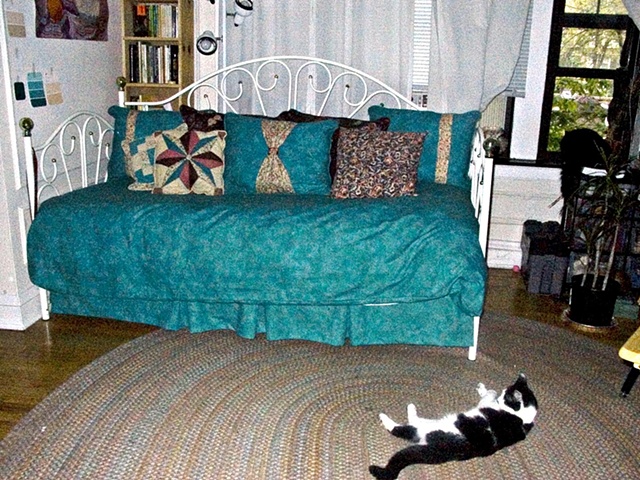