Edition of six: 1/6. Hard ground etching. At some point, the creek that ran by the back of my house in Otis was renamed Dimmock Brook. Bah humbug! I think the name is awful. Who was Dimmock? And who cares anyway? I believe the mill in question in the original name was a cider mill, but it could have been lumber. That area is heavily forested with hemlock, the bark from which was used to cure leather. It has a high tannin content. Making tack for horses was a big industry in the area in the late nineteenth century. So in all my work using the image of the creek, I give it back its original name, simple and self-explanatory. The creek was never boring, no matter what the season, and it's the main reason I've chosen to live near Lake Michigan now that I'm in Chicago. Proximity to water seems to connect one to life.

The tree that so resembles some kind of odd comb is a white pine that has died. 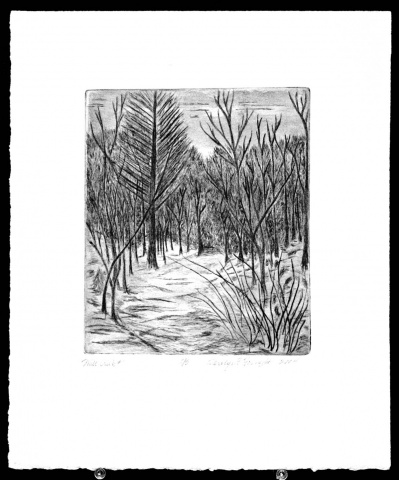