The art was created in Photoshop from a photograph of my father that I scanned. I then superimposed the printed material and drawing disfigurements that I'd drawn on vellum and scanned over the image. It wasn't easy to get everything to align and took several different attempts before I got a plate that worked. I also tried drawing with an etching tool directly into the photopolymer plate, but that isn't a technique I'd recommend. It was too difficult to control the cuts.

Once I had the image I wanted, I printed the it on a transparency sheet, usually made of Mylar, and exposed it to the photopolymer plate on a light table. After a brief bath in plain water and some gentle brushing with a soft brush, the plate is left in a window facing the outside light (the plates are also called "solar plates" for this reason) to cure. Then the plate is inked and printed in an ordinary etching process. Since the photopolymer resin is soft, the plates don't last through too many printings before they must be discarded.

As for subject matter, I'll say this: One of the things my sister and I agreed upon was the experience of having dinner in our childhood home. We felt as if we were sitting down in Hell. We remembered the walls of the dining room being made of flames. Our parents were heavy drinkers, and as the meal wore on, they became increasingly incoherent. Children can't win in this situation. No matter how good we tried to be, even a harmless bout of laughter could trigger my father's anger. My father's highest insult was to call us stupid. So we thought we were stupid for many years before and after we left the parental home.

When I made this etching, my instructor during critique said it was too cartoony. But not all cartoons are about funny things, and this one is intentionally from the child's point of view. I could never have made such a drawing when I was a child; it would never have occurred to me. If you had asked me what color my father's eyes were, I would have said red, like flames from Hell. As an adult, however, I can face both my father's funny side, which he definitely had, and this side, and recall it as I felt it. 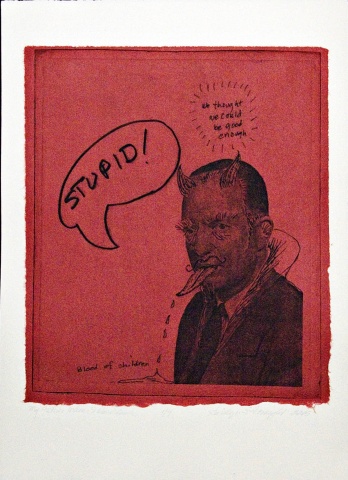