Edition of five: 1/5. This etching is up here for now to demonstrate an idea I have about work I'd like to do with these photopolymer plates. I scanned three family photographs into Photoshop, then brought them into a page I set up in InDesign. I then wrote a story about the family I'd heard from my grandmother, Minnie Thrall, and scanned it into Photoshop, then brought it into the InDesign page. The photographs are of my great-grandmother, Eveline Thrall in what appears to be middle age, my Grandpa Thrall, my mom as a baby, and my Grandma Thrall as a young mother. I believe the young girl standing next to her is a Gilson cousin who was listed in a census report as living with the family at that time.

Interestingly enough, I misidentified the people in the photographs. It wasn't until I paid a lot of money to join ancestry.com that I realized that both my Great-Grandfather Stephen Thrall and my Great-Great Grandfather Arza Thrall had died before my mother was born. So I thought the man holding the baby in his lap was Stephen when in fact it is Herb, my grandfather, who is holding his baby daughter. I also didn't know my great-grandmother's name until I did the genealogical research. In fact, Arza outlived Stephen by four years. I do know that Stephen died of cancer of the mouth from smoking a pipe. Both father and son served time in one of the Ohio regiments that fought in the Civil War. Arza was a hospital orderly and Stephen got captured, then paroled and fought in several battles in the South.

The written part is backed by a piece of chine-collee to make it stand out from the background. In the crit when I put this piece up, everyone thought I had honored the photographs "too much." Yes, well, I do honor old photographs. But I cleaned them up too much, removing my grandmother's writing from some of the images. So consider this a place holder until I can redo the scans, rewrite the narrative, and reprint the entire set of images.

What is important is that it shows what one of the newer plate-making processes can do, and if I get into graduate school I hope to do more work in this vein. 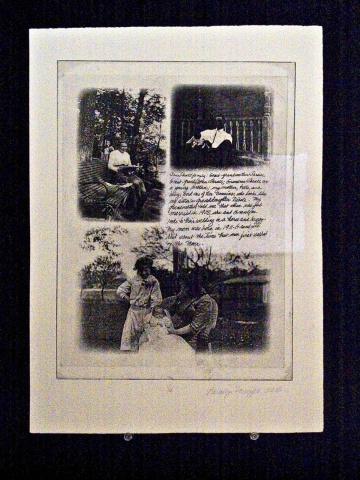